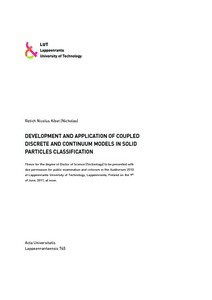 Bulk solids handling play a critical role in modern industrial processes. Particulate classification
is one aspect of materials (bulk solids) handling, the aim of which is to distinguish
unique particles by virtue of predetermined criteria. Construction, foods, mining, pharmaceutical
industries, power generation (e.g. the now versatile biomass-based co-generation
plants), and waste management etc., often require sorting in terms of size, specific gravity,
grain loading, shape, chemical composition, bulk density, resistivity, friability, wettability,
cohesiveness, resilience etc., prior to end-use or further utilization in downstream unit
operations. Moreover, bulk solids have been a complex material for several decades, as
the process is often referred to as ‘not fully understood’.
This dissertation is aimed at developing enhanced, and deeply understood methods for
modelling the flow of particles during size classification, by incorporating modern study
tools, including computer simulations, and experimental designs, targeted at improved
processes. One key objective is to understand the dynamics of granular flow in depth, and
to find ways to correlate the energy spent, and the efficiency in such solids classification,
both with gravity and vibrated screening equipment. This direct link holds the key to a
better understanding that may lead to optimal design and operation of particle classification
equipment. The second objective is to address the inefficiency caused by operations
at high capacity, through further development of the methods of determination of the rates
and optimization of classification processes. The final objective is to simplify these models,
to make them easy and applicable for rapid prototyping, fabrication and up-scaling in
relevant the industries.
First order rate law (FORL) has been used for a long time to estimate the rate of particles’
classification during screening. However FORL only calculates the current population
of particle (overflow), but does not estimate the difference in particle population, or the
underflow. In order to get the passage, the overflow must be subtracted from the original
mass or the particle count. Due to this problem, there are only a few mathematical models
(apart from someWeibull distribution functions), that can estimate underflow growth from
zero. The existence (or non-existence), of such models is usually described as failure, as
it censors some useful results. Secondly, FORL does not necessarily relate the moments
or rate constants, to the key design parameters of the unit operation, such as screen dimensions
and area, aperture sizes and shapes, and transient motion of particles along the sieve lengths in general. These problems present a challenge for, and are a limitation of
the FORL, and thus necessitates empirical, or data-driven modelling. In this thesis, all
the components of particle population are estimated simultaneously, which seems to be a
successful methodology for further development. An attempt is made to link these constants
to the design parameters, used in a representative case study on designing the unit
operation.
An improved theoretical model for the quantification of the rate of classification is postulated,
based on discrete and continuum mathematical theories. These models are tested
through a prototype screening equipment designed for studying the impacts of feed throughput,
flowability, and screen deck declinations on the overall performance of the screen.
Two extremes usually exist when considering rheology in fluid flow. Either it is assumed
purely compressible or incompressible. Contrary to these assumptions, it is shown in this
study that granular flows are divided into two regimes - the continuum constituting the
middle of the flow cross-section, and the bulk flow around it. The specific gravity of
the particle fluid tend to vary with the position (vector in space) in the continuum, but
invariant with time. In the bulk region, however, the specific gravity varies more with
time, but less with position, and thus the flow forms a quasi-compressible flow. Granular
flow is therefore described in this study as turbulent, unsteady, Newtonian fluid flow (in
a wide channel), with nominal to high densities, and generally low dynamic viscosities,
and consequently even lower kinematic viscosities. It is therefore incompressible within
the core continuum, but compressible around the bulk flow regime. The volume of the
continuum changes with space, and thus the density varies only macroscopically, but remains
nearly constant microscopically inside the continuum. The flow over the screens is
classified as unidirectional subsonic, meaning that the flow velocity is low (<_ 3:5ms -1)
and only in one direction (downslope), giving Mach numbers below 0.011. On the other
hand, when discrete models are considered, granular materials and powders are assumed
to be incompressible, dry, non-cohesive, and rigid, in order to allow time averaging of
the bulk velocity. Both models result in Newton’s second law for variable masses, whose
solution is found analytically and numerically. Obtaining and zeroing the gradient of the
fluctuation velocity enables achieving the agitation force requirements in G-force.
A close correlation was found between the developed theoretical and simulation models,
and experimental results. In general, dense screen loading is the main source of momentum
accumulation that increases the underflow rates, rather the capacity in ton per hour,
but reduces the flowability, and consequently the efficiency of size classification. For
multi-sized screens, it was shown that up to 99.99% efficiency can be achieved for gravity
separators while operating at low to medium capacity, but the same efficiency can only be
achieved operating at low capacities in vibrated screens.