Techno-economic analysis of a decarbonized shipping sector: Technology suggestions for a fleet in 2030 and 2040 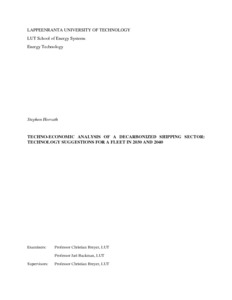 Techno-Economic Analysis of a Decarbonized Shipping Sector Technology Suggestions for a Fleet in 2030 and 2040.pdf (1.569Mb)
Lataukset:

Growing concerns about anthropogenic climate change and effects on the environment has encouraged significant recent developments to decarbonize the energy system. In the transportation industry, many aspects can be electrified which can result in significant CO2, particulate matter, and SOx reductions over the lifetime of the vehicle. The shipping industry alone accounted for 2.1% of global greenhouse gas emissions in 2012, however, due to energy requirements and weight restrictions, batteries and direct electrification cannot be used to mitigate emissions. Synthetic fuels as an indirect electrification option are a viable option to achieve emission reduction goals. The purpose of this study is to determine what combination of synthetic fuels and fuel cells or internal combustion engines is the most economically competitive to replace fossil oil as the main propulsion fuel in 2030 and 2040. The fuels are analyzed for both an internal combustion engine and a fuel cell and the fuels include RE-FT-Diesel, RE-LNG, RE-LH2 and RE-MeOH. The scenarios were analyzed by comparing the levelized cost of mobility (LCOM). The LCOM was composed of 5 different facets including the capex of the engines/fuel cells and the tanks, the opex of the engines/fuel cells, the cost of lost cargo space, fuel cost and the CO2 cost. The final unit of comparison was €/1000DWT-km. It was determined that hydrogen fuel cells were the most likely to replace fossil internal combustion engines if the fuel cells follow their expected development. Significant gains in fuel cell average efficiency and decreases in cost between today and 2030 and 2040 are what leads to the competitiveness. A CO2 cost was set to 61 €/tCO2 in 2030 and 75 €/tCO2 in 2040. Most of the other technology combinations are close to competing with fossil diesel with a CO2 price in 2040, however, hydrogen fuel cells are close to being able to compete with fossil fuel without a CO2 cost in 2040.