Indirect hydrogenation of CO2 to methanol via formate intermediate 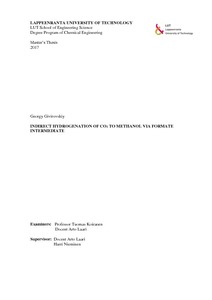 Methanol is an important chemical compound which finds various applications in industry. Methanol is mostly produced from fossil feedstock such as natural gas, coal and oil. The direct gas phase hydrogenation of syngas - mixture of CO, CO2 and H2 over Cu-Zn-oxide based catalysts is presently the main route of methanol synthesis. However, alternative routes of methanol production based on renewable sources, such as utilization of captured CO2 and renewable H2 produced from wind and solar energy, are of great interest due to the current increase of oil prices and growing concerns connected to climate change. Direct hydrogenation of syngas mainly consisting of CO2 to methanol is associated with problems related to thermodynamic limitations. For that reason, indirect hydrogenation of CO2 via its derivatives is gaining scientific significance. One such process is a low-temperature methanol synthesis in liquid medium. In this method alcohol is used as a catalytic solvent and acts as a promoter for the methanol synthesis reaction proceeding via corresponding formate intermediate.
For this thesis, the alcohol promoted liquid phase methanol synthesis performed in autoclave reactor was studied at laboratory scale. Experiments were carried out at a temperature range of 180-220oC and total pressure of 60 bar. Different alcohol solvents, such as 2-butanol, 1-butanol, 2-propanol and 1-pentanol were tested as promoters in the methanol synthesis. Conventional CuO/ZnO/Al2O3 catalyst was used as such and in combination with a molecular sieve and a Cr2Cu2O5 catalyst to evaluate the effects of simultaneous water removal and utilization of mixed catalysts on the methanol synthesis.
The specific productivity of methanol was found to increase with decreasing temperature of the process. In-situ water removal from the reaction mixture, as well as utilization of combined catalysts brought positive results regarding methanol synthesis. Maximal catalyst specific productivity of 54.4 g of methanol per kg of catalyst per hour and volumetric specific productivity of 3.36 g of methanol per liter of solvent per hour were obtained during the experiments. The productivity values are low compared to gas-phase synthesis from CO2. However, milder process conditions and simple operation of alcohol-promoted methanol synthesis could prove useful for small-scale methanol synthesis plant. Additional research is required to make final conclusions about the feasibility of this process.