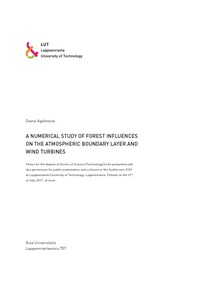 In the past years, energy consumption in Finland was not fully covered by the energy produced
in Finland, and approximately 20% of the total energy consumption was imported.
Despite the suitable wind condition, the wind energy production in Finland is very small -
only 2.8% of the total demand.
Massive land area (about 72%) in Finland is covered with forest. Therefore, there is a high
chance that wind turbines will be installed in forests. It is known that wind behaviour in
forests is rather complicated. Therefore, before the arrangement of a wind farm in and
above the forest, the investing company has to study the forest influences on the windturbine
wakes, fatigue and power production.
In the present thesis, Large-Eddy Simulations are carried out using OpenFOAM to investigate
the forest-canopy effects on the atmospheric boundary layer and wind turbines. The
effects were studied in small (two-turbine) as well as large wind-turbine arrays. For every
case, simulations are performed separately for two identical setups, with and without forest.
The results of the simulations in the forest case are further compared to the results of
the corresponding non-forest case to clearly show the changes in the wake and turbulence
structure due to the forest. Moreover, the actual mechanical shaft power produced by
each turbine in the small wind-turbine array and by a single turbine in the large array is
calculated for the forest and non-forest cases. Aerodynamic efficiency and power losses
due to forest are discussed as well. It is found that the loss of actual power due to forest
amounts to nearly 20%. The blade angle of attack is studied for cases with and without
forest. It is found that a non-optimal angle of attack in the forest case is responsible for
the power loss. Therefore, an active pitch control is proposed in order to reduce the loss
of actual power in the forest.