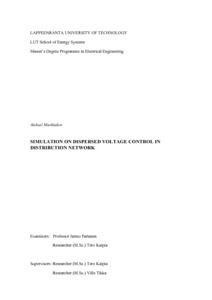 Renewable distributed generation (RDG) has become more accessible, affordable, and widespread than it was just a few years ago, leading to increasing number of connections to distribution networks. One of the technical challenges of such tendency is to maintain an acceptable voltage level that becomes inconsistent because of the inherent variability in the power output of RDG units. Therefore, it necessitates the development and implementation of effective voltage control strategies to reliably supply energy to the equipment of end users. To solve this problem, a modified automatic voltage control (AVC) algorithm that can operate utilizing a model of a controlling network and/or real-time measurements was proposed to keep the voltage within the acceptable limits. Also, the effectiveness of demand response (DR) algorithm for stand-alone voltage control was investigated to evaluate its perspectives. The cooperation of the modified real-time AVC algorithm with both reactive power control (RPC) of photovoltaic (PV) systems and DR was investigated to decrease the number of on- load tap changer’s (OLTC’s) operations. The effectiveness of the developed dispersed voltage control algorithms was tested in different simulation conditions on a verified model of a power grid that has been created in MATLAB®. The results of the research have proven the reliability of both versions of the modified AVC algorithm in distribution networks with RDG. Furthermore, the results also allowed evaluating the amount of controllable load for stand-alone voltage control based on DR algorithm. The cooperation of AVC algorithm with DR algorithm reduced the use of OLTC, while the combined actions with RPC of PV systems were less effective and resulted in the same number of OLTC’s operations in comparison to the stand-alone performance of AVC algorithm in the same conditions.