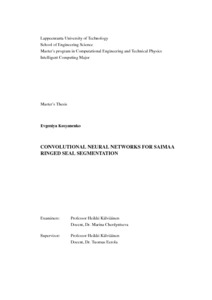 Nowadays, an automated photo-identification of animals is an emerging research topic due to appearance of large labor-intensive image datasets. The Saimaa ringed seal has a distinctive patterning of dark spots surrounded by light gray rings. This pattern is unique to each seal, enabling the identification of individuals in an image. A common approach is to preprocess an image by performing segmentation to separate an object from its background. In this research, convolutional neural networks (CNN) are used for Saimaa ringed seal segmentation. The main objectives of the research were to survey existing CNN based approaches on semantic image segmentation, implement a CNN-based method, and evaluate the method using the Saimaa ringed seal image database. A method based on CNN was implemented. The method was evaluated using a dataset consisting of 168 images of seals. 75\% of the images were correctly segmented.