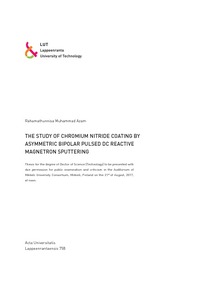 Polymers and carbon fibre reinforced polymer (CFRP) composites are used to replace
metallic components in wide range of applications. In most of the applications, the surface
of the polymers and CFRP composites that interacts require good wear resistance.
Coating the surface by chromium nitride known to possess good wear resistance by
Pulsed DC Reactive Magnetron Sputtering technique is one of the methods suitable for
polymers having low temperature resistance. Adhesion is a challenging part while coating
the polymers and polymer based composites as polymers are innately hydrophobic having
low surface energy. Plasma pretreatment of polymer surfaces helps to improve the
adhesion. In the present study, the following polymer based substrates were used: vinyl
ester matrix CFRP composites, vinyl ester-thermosetting polymer and thermoplastic
polymers such as polyamide PA), polycarbonate (PC) and polymethyl methacrylate
(PMMA). The effect of ion cleaning on adhesion by pull off adhesion tester was analysed
with argon ions for CFRP, and with argon and argon/nitrogen mixture for the polymers.
The film stoichiometry is generally found to influence the properties of the coating. To
know the effect, chromium nitride was deposited at different nitrogen partial pressure on
CFRP and polymer substrates. Other than the nitrogen partial pressure, the substrate
material was also found to affect the structure, mechanical properties and wear
performance of the coatings. Depending on the polymer substrate material, the
relationship between wear resistance and plastic deformation resistance of the coating
varied. The wear performance of coatings on CFRP was not well due to the presence of
carbon fibres near the surface that made the surface rough and inhomogeneous.
Asymmetric pulsed DC used for the unbalanced magnetron sputtering technique for the
present study is known to produce high levels of energetic ion bombardment due to the
fluctuations in plasma potential, which occur during the pulse cycle. The bombardment
of the substrate by these ions may have a significant impact on the growing film. The ion
fluxes and energies, which impinge on the substrate during the deposition of chromium
were analyzed using energy resolved mass spectrometry at different pulse frequencies. It
was found that there was a remarkable increase in ion flux at higher pulse frequencies.
The variation of the ion flux with pulse frequency was explained by a simple model. The
behavior of the ion fluxes on the magnetron centre line and in off-axis position was
compared and was found that on the centre line there was an additional mid energy ion
flux, which was not present in the offset position. This change arises from the ion flow
directed along the magnetic field lines from the racetrack region to the substrate or probe position because of the unbalanced magnetron configuration. Chromium nitride was
coated on silicon and glass substrates at different pulse frequencies to know the effect of
ion bombardment at off-axis position of the substrate on coating characteristics such as
structure, morphology and mechanical properties. From distortion in structure to change
in morphology, roughness, stress and mechanical properties, the ion energy bombardment
was found to have a significant impact on the coating.