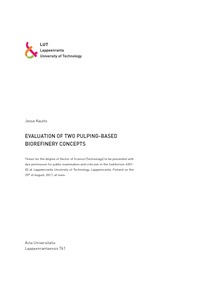 The viability of two biorefinery concepts is evaluated: the extraction of hemicelluloses
from wood chips prior to kraft pulping for the production of paper-grade pulp and ethanol,
and organosolv pulping for the production of ethanol, lignin and other co-products.
Hemicellulose extraction through prehydrolysis is conventionally applied in the
production of dissolving pulp. In this thesis, the prehydrolysis process is studied as a preextraction
method combined with paper-grade pulp production. The premise of such
paper-grade pulp production concept is in more efficient utilization of hemicelluloses: a
large share of the hemicelluloses is dissolved in cooking and combusted in the recovery
boiler. Water prehydrolysis before cooking would enable extracting them partially and
converting them to more value-added products than energy. This was the premise also in
the BiSe project (2007 – 2010) in which the thesis work related to hemicellulose
extraction was carried out primarily in 2009 – 2010. Two related publications, in which
softwood was used as raw material, were published in 2010.
A technical evaluation of the hemicellulose extraction concept was carried out. The
evaluation covered the effects of the process on the operation of the pulp mill and pulp
quality, and the conversion of the generated prehydrolyzate to ethanol. The evaluation
included laboratory experiments carried out in the BiSe project, a simulation model built
based on them and an extensive literature review. In the water prehydrolysis and cooking
experiments of Scots pine (softwood), the yields on wood after cooking decreased
considerably, which, in constant pulp production, resulted in a considerable increase in
wood consumption. The increased wood consumption indicated that water prehydrolysis
would not lead to more efficient utilization of hemicelluloses.
In addition to increased wood consumption, also other disadvantages were identified.
With 14 % of the wood material exctracted, hemicellulose extraction was found to result
in a relatively low ethanol output. With a low carbohydrate concentration and problems
associated with sticky precipitates and inhibitory compounds, the processing of the
prehydrolyzate to ethanol was expected to be difficult and costly. Water prehydrolysis
also increased the load on the evaporation plant and recovery boiler considerably, and the
effects on the quality of the produced pulp were found to be inconclusive at best. For
general paper-grade pulp production, the concept was therefore not considered attractive.
While the focus of the study is on the co-production of paper-grade pulp and ethanol, it
is reminded in the thesis that prehydrolysis in combination with kraft pulping is common practice in dissolving pulp production. The recovery and use of the sugars present in the
prehydrolyzates of dissolving pulp production would be considerably more attractive than
the concept studied in this thesis.
Organosolv pulping was originally designed for the production of paper-grade pulp but
the process has also been considered as a potential pretreatment and fractionation step in
the production of lignocellulosic ethanol or other biofuels or chemicals. As a pretreatment
step, the key advantage of organosolv pulping is the ability to recover so-called
organosolv lignin, which is a high purity and narrow molecular weight distribution lignin
product. In the thesis, a conceptual process design, a simulation model and an economic
assessment of an organosolv cooking-based biorefinery were developed based on
available literature. In the studied process, hardwood chips are cooked in a mixture of
ethanol, water and sulfuric acid (catalyst). Economic feasibility was assessed by the
minimum price of ethanol that is required to cover the costs of production and make a
certain return on the invested capital (so called Minimum Ethanol Selling Price). The
process was compared to a dilute-acid pretreatment-based ethanol production process.
The research work was carried out primarily in 2010 – 2011, and the two related articles
were published in 2013 and 2014.
With a feed of 2000 dry t/d debarked hardwood chips, the modeled organosolv process
produced 459 t/d (53.9 million gallons/204 million liters per year) of ethanol. The
process produced also considerable amounts of organosolv lignin and smaller amounts
of other co-products, furfural and acetic acid. Due particularly to the recovery of the
solvent, the process was found to consume more energy than the reference dilute acid
process. This, along with the recovery of co-products, resulted in a need of external fuel
to cover the steam demand. With a more complex flowsheet, the organosolv process
was also found to have a higher investment cost than the reference process. The
economic assessment showed that the price of organosolv lignin largely dictates
whether the key advantage, the recovery of the lignin, outweighs the two main
disadvantages, higher energy consumption and capital costs. With a base case lignin
price of 450 USD/t, the minimum ethanol selling price of the organosolv process was
higher than that of the reference process. A higher lignin price was required to make the
organosolv process cost-competitive, demonstrating the importance of finding highervalued
applications for the lignin. As a conclusion, it can be stated that the organosolv
concept can be generally considered as attractive if higher-priced applications for the
organosolv lignin can be identified. Data from larger-scale experiments, as well as
application testing and market development work related to organosolv lignin would,
however, be needed to improve the accuracy of the evaluation of the concept.