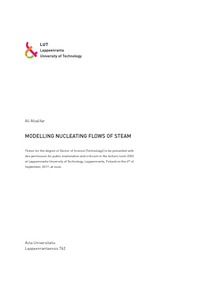 The nucleation-induced condensation of steam in the course of expansion in turbines
gives rise to the loss of efficiency and blading erosion. Numerical modelling is a precious
asset to predict and understand the condensation effects on the steam turbine performance
with the aim of developing more-informed turbine design methods. This thesis concerns
the two main constituents of numerical models for nucleating flows of steam; the phase
change model and the dispersed multiphase flow model.
With respect to the phase change model, the classical nucleation theory is examined in
light of the recent nucleation rate measurements for water. In particular, the
supersaturation dependence of classical nucleation theory is critically evaluated. It is
shown that the underproduction of the liquid mean droplet size can be explained in
connection with not only the droplet growth equation but also the nucleation rate
equation.
With respect to the second aspect, several models which are typically the most common
choices for modelling wet-steam flows are implemented and compared with one another.
Among these models, the moment-based methods are particularly attractive as they can
take account of the polydispersity of wet-steam flows while conveniently lending
themselves to an Eulerian reference frame. However, it is discussed that the moment sets
can become corrupted applying high-order temporal and spatial discretisation schemes. It
is shown that moment corruption completely blocks the application of the quadrature
method of moments. Moreover, it is demonstrated that although the moment corruption
does not block the conventional method of moments, it can result in droplet size
distributions with negative or unreasonable variance and, therefore, increases the
uncertainty over the results.