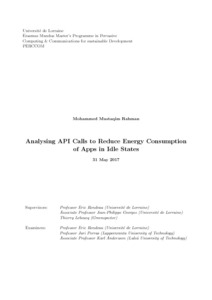 Mobile devices are an inseparable part of modern era. Smartphones are used for various purposes in our daily life, such as- making calls, sending and receiving emails, listening to music, taking photos, reading books, booking tickets, etc. Hundreds of apps, countless tasks and lots of processing power with improved user experience is a common trend for every smartphone. But the issue of battery life is struggling to keep up with the improvement of processor, memory, storage and other hardwares. However, excessive energy consumption of apps in mobile devices due to bad programming practices, inefficient API usage patterns or energy greedy hardware can significantly reduce battery life. Moreover multitasking capability of smartphones have opened up a new dimension to its users. Frequent switching between apps often cause previously used apps to run in idle mode either in foreground or in background. In this thesis an analysis has been done to measure the energy cost of API methods called by an application during execution in idle states. The experiments were conducted on ten android apps from different domains. For energy consumption measurements of these apps on the device Greenspector software tool is used, as this thesis work is conducted collaboratively between University de Lorraine and Greenspector. Based on the collected data from application’s energy consumption measurements, an analysis has been done on API calls invoked by the application during execution and its impact on the device to find anomalies in order to reduce platform discharge. Finally, the work is summarised by providing a reference ranking to developers regarding energy consumption of certain categories of Android APIs.