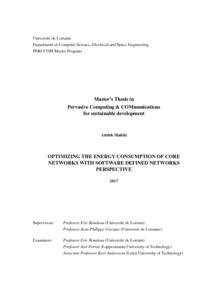 The dense usage of networks in peak times forced network designers to over-provision resources to satisfy the needs during these speciﬁc times. Resources such as bandwidth, processing power, and memory are prepared oversized to handle high trafﬁc loads, however, most of these devices are underutilized during the non-peak times and this unlocks the potential to optimize the power consumption of the resources proportionally to its actual trafﬁc utilization. Due to the vertical integration of the control and data plane in the conventional network, managing the network is challenging. The Software Deﬁned Networking (SDN) is a novel networking approach, which provides a programmable and logically centralized control plane, separating the network control from the forwarding devices. Thanks to the features introduced by SDN, the decisions for the network such as routing and forwarding are made globally. In this research, considering GÉANT network, we proposed a method by which we can remove up to 41% of the link during the peak time trafﬁc and save up to 14% of the total power consumption.