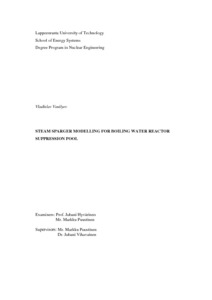 During the Fukushima accident a pressure inside the containment was twice higher than it was supposed to be under fully mixed pool conditions. It became clear, that there’s a need for a more detailed study of the pressure decreasing phenomenon in pressure suppression pools. This kind of pools are an essential part of the nuclear plant containment in BWRs. Several tests have been done in PPOOLEX facility with the aim to get more data for the development of the EHS and EMS model and further implementing these models in GOTHIC code. In the current master’s thesis an experiment under the PPOOLEX facility, namely the SPA-T3 test, has been modelled using TRACE code for nuclear power plants.