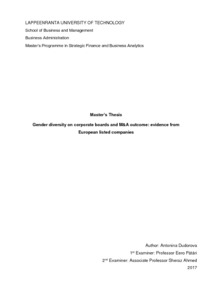 Gender diversity in the workplace, including gender diversity in the decision-making positions of the corporations is one of the most discussed topics by both scholars and corporate world. The purpose of this thesis is to examine the relationship between fraction of women on boards of European listed companies and M&A outcome between the years. One of the behavioral biases influencing post-M&A performance is managerial overconfidence, which, as previous studies show, is more common for male directors. Fraction of female directors plays the role of overconfidence-mitigating proxy in relation to M&A outcome. The proxy used for indicating M&A failure is abnormal operating performance as suggested by Craninckx & Huyghebaert (2011).

Data sample consists of 279 finished deals across Europe performed in 2008-2014. Binomial logistic regression with industry and year fixed effects is used as an analysis method. The results show that fraction of female directors is negatively and significantly associated with the probability of deal failure. The result holds across the specific group of industries including agriculture, manufacturing, mining, trade, education, health, transportation, constructing and specific service activities.