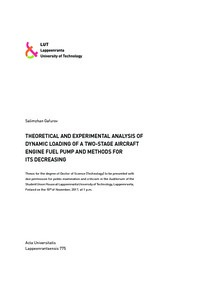 Aircraft fuel pumps are known to be the most loaded units of the gas turbine engines. Primary engine fuel pump is the key component limiting the reliability and endurance of the fuel system, and, as a result, the durability of the whole engine.

This dissertation is devoted to development of the mathematical model allowing to describe the working processes inside of the two-stage aircraft engine fuel pump consisting of screw-centrifugal and gear stages. A finite-volume discretization method was realized in a commercial code ANSYS CFX and subsequently used for the Navier- Stokes equations solution. Developed mathematical model was verified and showed to produce good accuracy of pump performance estimation. Developed approach was used for CFD simulations of the ingestion process of free gas into the first stage of the pump. The CFD analysis has been used to calculate an unsteady three-dimensional viscous flow of multi-component fluid in the screw-centrifugal pump. Calculations have been made to determine unsteady loads of fuel pump in different operating modes. To examine the efficiency of the CFD analysis, a series of experiments have been conducted. The experimental results proved the accuracy of the numerical model. The results allowed to develop design modifications of the considered pump for reduction of its dynamic loads. The main focus in this study was addressing the reduction of dynamic loading of the twostage fuel pumps. It had to be done without any changes in operation modes of engine fuel system. Design modifications have been proposed to decrease the two-stage aircraft engine pump loading. This loading includes both pressure pulsation and the vibrational load. This dissertation describes theoretically and experimentally the efficiency of the proposed pump design modifications entering re-designs. The results illustrate how the proposed redesigns reduce the flow unsteadiness in the two-stage pump at its different operating regimes. Proposed construction changes enhance the reliability and endurance of aircraft engine fuel pumps.

In addition, this dissertation describes the developed semi-natural test bench and measurement techniques which were applied for investigations of considered pump dynamic loading. The semi-natural test bench contains the mathematical model of the gas-turbine engine for research the fuel supply and control systems characteristics. A number of semi-natural and hardware-in-loop (HIL) test benches for investigation of both gas turbine engine’s fuel and control systems are shown. An aggregate composition of hydro-mechanical system and the methodology of the used testing technique are also presented. Some aspects of controlled object mathematical simulation and the basic approaches for its implementation are described. Developed bench allows to simulate and define the performances of the whole fuel system and its aggregates in steady-state and transient operating regimes in the closed and open loop circuits. Additionally, it allows to perform the analysis of available control system stability margins, to carry out the interaction of separate circuits and aggregates or to study influence the perturbations and external factors on control system fail safety.

Finally, the theory of vortex resonance inside screw-centrifugal stage of the pump induced by its gear stage elements vibrations and trailing vortices is presented. The main idea of this theory is the coincidence of frequencies of trailing vortices, stalling from the screw and centrifugal wheels, and frequencies of leakages from the gear stage that are poured out into the chamber between stages. Obtained experimental results confirm this theory and allow better understanding of the flow processes inside the pump.