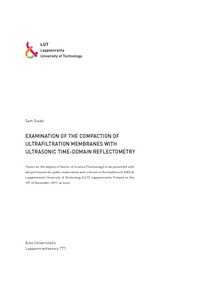 Ultrasonic Time-Domain Reflectometry (UTDR) can be used to monitor the membrane casting process, compaction, fouling and cleaning in real time and non-invasively. UTDR is based on the detection of the time of flight of the sound waves that are reflected from the membrane surface. However, the usability and accuracy of this technology are very sensitive to changes in the process conditions, such as the temperature, pressure and concentration, due to the fact that sonic velocity is affected by them.

In this thesis, environmental compensation for UTDR has been developed to measure sonic velocity with an additional reference transducer or a double transducer. The double transducer has two sensors at different distances, which allows determination of sonic velocity. UTDR with the reference transducer was found to be more accurate in practical use than UTDR with estimated sonic velocity. Inside the module, integrated transducers seemed to be more sensitive to detecting membrane fouling than measurements through the top plate of the membrane module, which is the common way to use the technique. The developed environmental compensation with transducers integrated inside the module were used to study membrane compaction. Compaction has earlier been studied mostly with offline methods, which lack reversible compaction and permeability information. Online monitoring revealed how different temperatures and pressures affected the reversible and irreversible compaction of different polymeric membranes and their permeability. It was noticed that reversible compaction can be mistaken for concentration polarization as they both have a similar effect on membrane permeability. This may lead to the adoption of inappropriate mitigation methods. Also membrane retention was studied to achieve better understanding of how retention is affected by irreversible compaction of the membrane, and it was confirmed that it was possible to modify membrane retention by pre-compaction of the membrane. It was possible to increase the retentions of all tested membranes by compacting them in higher pressure before use.