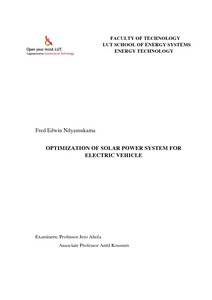 Recent studies confirm that fossil fuel consumption accounts for the majority of greenhouse gas emissions which have largely contributed to global warming. Therefore, utilisation of renewable sources is vital today. A step towards increasing the share of renewable energy in the energy mix is the design of a solar powered vehicle which is discussed in this research. The basic principle of a solar vehicle is to utilise the energy generated by the solar panel and stored in the battery. The charged battery acts as a fuel tank and is used to supply electricity to the drive train and move the vehicle both in the forward or reverse direction.

However, utilisation of solar energy is not free of disadvantages. It is almost impossible to build a reliable electric power system depending on solar energy alone because of its high volatile nature. This is because it is difficult to balance generation and consumption of solar plants. Solar energy generated in certain periods would not be sufficient to cover consumers’ needs while large amounts of electricity generated by solar panel in certain periods will go to waste. The solution to overcome this problem is to control our consumption and utilisation of batteries and vehicle-to-grid technology so the excess electricity is not wasted.