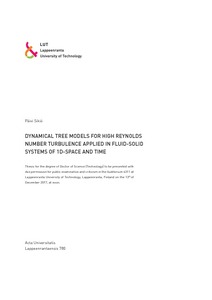 A modified hierarchical spatiotemporal dynamical system model (tree model) is utilized to study turbulence modulation caused due to the insertion of a dispersed phase particle in turbulent field. Multiscale nature of the problem combined with the interaction among different phases makes the handling of turbulent dispersed phase multiphase flows intricate and computationally costly. Navier-Stokes equations, describing the turbulent flow evolution are highly complex for numerical solution techniques and even more challenge is added in case of high Reynolds numbers. Shell models are simplified dynamical models, which imitate the behaviour of the Navier-Stokes equations in time domain. They are capable of capturing many fundamental features of turbulence, such as the intermittency and the anomalous scaling of the turbulent energy cascade mechanism, with striped-down system of coupled nonlinear ordinary differential equations. They offer an efficient tool for studying the high Reynolds number turbulence. The focus of this work is the utilization of a hierarchical shell model, a tree model with one spatial dimension and time, for the study of turbulent energy dissipation rate in the direct vicinity of dispersed phase particle. Tree models put forward a new approach in handling the particle-turbulent field interface enabling both temporal and spatial fluctuations of turbulent energy cascade in high Reynolds number cases. In this thesis work, for the first time, a solid particle is applied in those models to study the distribution of the energy dissipation reproduced by common dynamical models of turbulence. Two different tree models, namely A and B, are considered, which have different number of nonlinear interactions. The models are modified to take into account the presence of dispersed phase. The model performance is studied, as different sizes of particles larger than Kolmogorov length scale are inserted in sustained or decaying turbulence. The study of time-averaged spatially resolved energy dissipation rate shows local augmentation near the particle surface compared to the farther locations. The amount of the augmentation is found to be proportionally dependent of the size of the particle, and it is effective in the range of 1-1.5 particle diameters from the particle surface. The results are compared to the studies found in literature. For comparison, also some computational fluid dynamics (CFD) simulations are performed using the computer package of ANSYS-Fluent. Furthermore, shell model simulations are performed with dual particles separated by certain distances of one to three particle diameters in forced turbulence. Dissipation escalation is detected at the particle surfaces. The energy dissipation rate in the middistance of the particles is found to be lower than that at the particle surfaces and it decreases as the distance between particles increases. Furthermore, simulations with variable Reynolds number, Re~1/ν as 104, 5×104, and 106, are studied for unladen and particle laden cases. Larger dissipation rise near particle surface is observed for smaller Re, when the particle size is the same compared to the Kolmogorov length scale. If the physical particle size is kept the same, dissipation rise at the particle surface is found to be similar for different Reynolds numbers. Velocity field structure functions are employed to study the scaling properties of the model with particle insertions using extended self-similarity (ESS) method to find the scaling exponents of the structure functions. Results are compared to the unladen case and the values from literature. Intermittency was detected in unladen and laden simulations of both models A and B. For model A, higher levels of intermittency were discovered in comparison to model B. The comparison of simulations using model B with variable particle sizes revealed larger degree of intermittency in larger particle sizes. The impact of the current research is in introducing a new insight into the numerical modelling of highly turbulent flows in twophase flows, which are computationally challenging or costly using conventional CFD techniques.