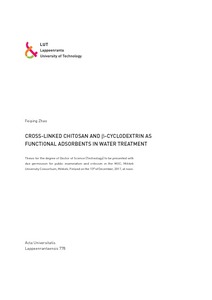 In recent decades, the worldwide occurrence in water resources of various pollutants, such as toxic heavy metals, dyes, and pharmaceuticals, has raised increasing public attention about the inverse effects on human health and environment. Polysaccharides, such as chitosan and β-cyclodextrin, have the potential to remove these pollutants from water. The present thesis consists of the preparation of five poly(carboxylic acid)s (PACs) or their dianhydrides cross-linked chitosan and/or β-cyclodextrin adsorbents, their characterizations, their applications in water treatment, their kinetic and isotherm studies, their probable adsorption mechanisms, and their regeneration abilities.

In these settings, chitosan is considered as the backbone of the adsorbents; PACs, such as EDTA and DTPA, act as not only linkages but also chelating groups, which are effective in adsorption of metal ions, and thus enhance the metal uptake abilities of the polysaccharide materials significantly; the immobilized β-cyclodextrin cavities are expected to capture organic molecules through host-guest inclusion interaction. These settings combined the advantages of each component while at the same time diminishing their disadvantages.

Based on this design, the selective adsorption of targeted metals from multi-metal system was realized by magnetic EDTA-/DTPA-chitosan, due to the fact that the chelating groups possess different binding affinities toward different metals; the simultaneous and efficient removal of metal and dyes were achieved by EDTA-cross-linked β-cyclodextrin (EDTA-CDP). The adsorption kinetics were very fast for all the prepared adsorbents. The isotherms revealed the adsorption mechanisms of chelation for metals as well as host-guest inclusion for organic pollutants. These also indicated the regeneration methods for the spent adsorbents, such as diluted nitrate acid for metal-loaded adsorbents and ethanol solvent for organic pollutant-loaded adsorbents. The stability and regenerability guaranteed their applications in practical wastewater such as a real industrial effluent from a nonferrous metal smelter. Lastly, prior to analysis, EDTA-CDP was successfully applied to preconcentrate rare earth elements from seawaters. Overall, both the experimental results and theoretical studies suggest that the studied cross-linked chitosan and/or cyclodextrin polymers are the promising adsorbents in wastewater treatment.