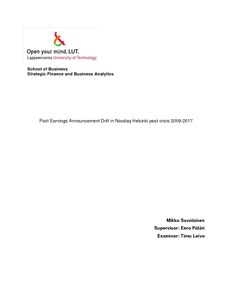 The post earnings announcement drift is an anomaly that was first discovered by Ball and Brown (1968) and been nominated by Fama (1998) to granddaddy of all anomalies. The prior literature has discovered PEAD all around the world with different datasets and models and wide range of explanations has been offered but none of them gained the reputation of being the complete. The purpose of this study was to investigate whether existence PEAD can be verified in Nasdaq Helsinki after financial crisis as technology has developed enabling information to move faster into prices.

This study consists of 1671 observations between 2009 and 2017 which are then divided into two sub-categories based on the company size and accounting performance. Data was derived from Bloomberg database and study was created by using event study -methodology. All results were relatively similar: information incorporated slower when news were positive compared to negative news confirming that information has transferred to prices in Nasdaq Helsinki between 2009 and 2017 relatively fast but PEAD still exists in some form. Large companies experienced wider reaction to positive news whereas negative information was adapted into all groups on the event date. Based on accounting performance, historical winners would have been optimal choice for investor in positive news -scenarios if PEAD was to be exploited as they carried the highest abnormal returns.