The wood pellet business in Russia with the role of North-West Russian regions: Present trends and future challenges 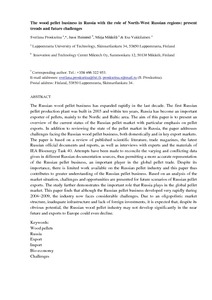 The Russian wood pellet business has expanded rapidly in the last decade. The first Russian pellet production plant was built in 2003 and within ten years, Russia has become an important exporter of pellets, mainly to the Nordic and Baltic area. The aim of this paper is to present an overview of the current status of the Russian pellet market with particular emphasis on pellet exports. In addition to reviewing the state of the pellet market in Russia, the paper addresses challenges facing the Russian wood pellet business, both domestically and in key export markets. The paper is based on a review of published scientific literature, trade magazines, the latest Russian official documents and reports, as well as interviews with experts and the materials of IEA Bioenergy Task 40. Attempts have been made to reconcile the varying and conflicting data given in different Russian documentation sources, thus permitting a more accurate representation of the Russian pellet business, an important player in the global pellet trade. Despite its importance, there is limited work available on the Russian pellet industry and this paper thus contributes to greater understanding of the Russian pellet business. Based on an analysis of the market situation, challenges and opportunities are presented for future scenarios of Russian pellet exports. The study further demonstrates the important role that Russia plays in the global pellet market. This paper finds that although the Russian pellet business developed very rapidly during 2004–2009, the industry now faces considerable challenges. Due to an oligopolistic market structure, inadequate infrastructure and lack of foreign investments, it is expected that, despite its obvious potential, the Russian wood pellet industry may not develop significantly in the near future and exports to Europe could even decline.