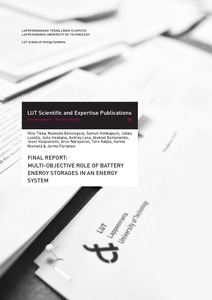 This research project aimed at establishing an interconnection between multiple battery storage units as well as defining and testing operation strategies for battery energy systems in different use cases. The project took full benefit of the existing battery storage infrastructure located in Helsinki (Suvilahti), Suomenniemi (storage in an LVDC microgrid) and Lappeenranta (LUT Green Campus stationary and mobile storages). Each of these storages was in active operation already before the project started. However, the storages are operated independently of each other, and their operation is not yet fully optimized for the needs of electricity markets and the power system.
In the research project, a storage system has a stakeholder-specific multi-objective role, which means that the storage system has to respond to several service requests simultaneously. This may mean, for instance, operating at the same time in the frequency control in the electricity markets, trading electricity in the day-ahead, intraday, and ancillary markets, simultaneously offering various services to local network operations and several other stakeholders. This kind of multi-objective operation requires full understanding of interactions of different markets and stakeholders and risks related to the conflicting objectives of the stakeholders.
One of the key outcomes of the project work was the establishment of a connection to the Suvilahti BESS unit through an IEC 104 protocol. Another outcome was constructing a simulation tool in Matlab that enables testing of numerous scenarios of a single BESS unit operation with different operating parameters and various operating strategies. The major part of the analyses was done based on the results of the simulation tool. There are two further main outcomes of the project. The first one is that it is technically possible to remotely control multiple BESS units against multiple tasks according to a pre-defined logic. The second outcome of the project is that a BESS can and should be operated against multiple tasks simultaneously. During such an operation, there may or may not emerge a conflict of objectives between the involved stakeholders. The nature of the conflicts has been investigated and the methods to mitigate the conflict have been analysed. The aggregation of BESS resources is one way to mitigate the conflict of objectives.