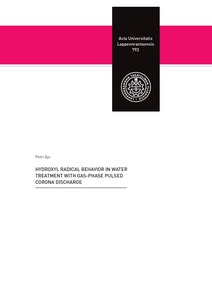 In recent years, the problem of pharmaceutical residues in wastewaters accumulating in the environment has become of growing concern. Although some pharmaceutical compounds are easily biodegradable, many exhibit strong refractory character, rendering conventional biological wastewater treatment an incomplete enterprise. The application of gas-phase pulsed corona discharge (PCD) is one of the potential alternatives studied for the energy efficient oxidation of aqueous organic pollutants, and forms the subject of the present study. This thesis assesses the behavior of hydroxyl radicals (OH) in PCD water treatment. The process is also studied for application in removal of pharmaceutical residues from real wastewaters. It is seen that OH formation and utilization depends strongly on hydrodynamic conditions with the gas-liquid contact surface being a major variable for oxidation energy efficiency, which can be increased by increasing the contact surface area. Excessive volumetric flow rate, however, results in adverse effects due to disturbances in the plasma zone that unfavorably alter the net effect between radical oxidant formation and premature termination reactions. The optimum gas-liquid area increases with pulse frequency. Furthermore, it is shown that the OH radicals are only produced on the gas side of the gas-liquid interface, from where they dissolve through the phase boundary for reactive affinity with the aqueous pollutants; no plasma induced primary reactions take place in the liquid phase to form OH. The successful transfer through the phase boundary requires an atomic H scavenger in the gas phase to avoid undesirable recombination of the radicals, thus enabling the oxidant reactions with the dissolved species. In contrast with the liquid phase, the plasma-produced OH radicals remain effective in oxidation of gaseous species even in the absence of H scavenger, which is explained by the immediate phase affinity of the oxidant and the reactant. Harnessing the reactive oxygen species for the degradation of pharmaceutical compounds in municipally treated wastewater effluent, raw sewage of a hospital and biologically treated wastewater from a health institution showed high feasibility and energy efficiency of the process in non-selective destruction of a variety of pharmaceutical substances and their metabolites. The pharmaceutical content of the wastewaters is substantially higher if transformation products are also considered, which leads to an inherent negative bias in the removal efficiency estimations due to the simultaneous reformation of the original parent substance during oxidation, for which the transformation products may act as precursors. On the other hand, this further emphasizes the importance of non-selective oxidation of products exhibiting biological activity.