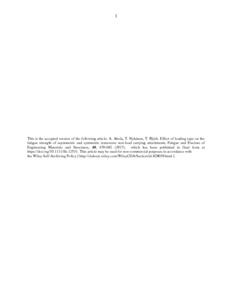 This study considers the effect of bending loading and the symmetry of joints on the fatigue strength of transverse non-load carrying attachments. Conventionally, the fatigue strength of a welded joint has been determined without taking these factors into account. Experimental and finite element analyses (FEAs) were carried out and both methods showed that both loading type and symmetry have an influence on the fatigue resistance of a welded joint. Under tensile loading, the fatigue strength of asymmetric T-joints was higher than that of symmetric X-joints. Respectively, the fatigue resistance of tested joints improved explicitly when the external loading was bending. The FEA was in good agreement with the test results in the joints subjected to tension but gave very conservative results in the joints subjected to bending.