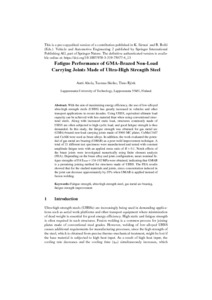 With the aim of maximizing energy efficiency, the use of low-alloyed ultra-high strength steels (UHSS) has greatly increased in vehicles and other transport applications in recent decades. Using UHSS, equivalent ultimate load capacity can be achieved with less material than when using conventional structural steels. Along with increased static load, structures commonly made of UHSS are often subjected to high cyclic load, and good fatigue strength is thus demanded. In this study, the fatigue strength was obtained for gas metal arc (GMA)-brazed non-load carrying joints made of S960 MC plates. CuMn13Al7 and CuAl8 were used as braze alloys. In addition, the work evaluated the poten-tial of gas metal arc brazing (GMAB) as a post-weld improvement technique. A total of 21 different test specimens were manufactured and tested with constant amplitude fatigue tests with an applied stress ratio of R = 0.1. Notch effects of the braze joints were investigated numerically using finite element analysis (FEA). Depending on the braze alloy and joint configuration, mean nominal fa-tigue strengths of FATmean = 134-192 MPa were obtained, indicating that GMAB is a promising joining method for structures made of UHSS. The FEA results showed that for the studied materials and joints, stress concentration induced in the joint can decrease approximately by 20% when GMAB is applied instead of fusion welding.