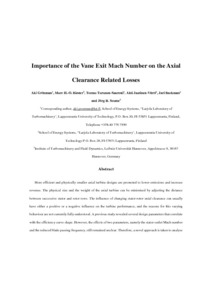 More efficient and physically smaller axial turbine designs are promoted to lower emissions and increase revenue. The physical size and the weight of the axial turbine can be minimised by adjusting the distance between successive stator and rotor rows. The influence of changing stator-rotor axial clearance can usually have either a positive or a negative influence on the turbine performance, and the reasons for this varying behaviour are not currently fully understood. A previous study revealed several design parameters that correlate with the efficiency curve shape. However, the effects of two parameters, namely the stator outlet Mach number and the reduced blade passing frequency, still remained unclear. Therefore, a novel approach is taken to analyse the correlations between the two design parameters and the axial clearance efficiency curve shape. Several different turbines are analysed using data available in the literature, and also new data are presented. The study suggests that the stator outlet Mach number correlates reasonably well with the efficiency curve shape, and it was further linked to five loss mechanisms and the rotational speed. Although the unsteady interaction plays an important role in the loss share, the level of unsteadiness did not correlate with the efficiency curve shape.