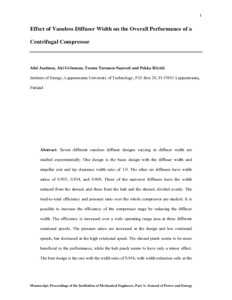 Effect of Vaneless Diffuser Width on the Overall Performance of a Centrifugal Compressor.pdf (551.4Kb)
Lataukset:

Three vaneless diffuser designs, varying in diffuser width, for centrifugal compressor were studied experimentally. Along with the diffuser width, the tip clearance was altered. The compressor overall performance and diffuser flow fields were studied for each of the three diffusers at four different tip clearances. For the diffuser flow fields, the total pressures were measured with probes traversed over the diffuser width both at the diffuser inlet and outlet. Along with the total pressures, the static pressures were measured adjacent to the probes. This enabled the axial flow angle and velocity distributions to be studied. The pinches tested improved the stage efficiency mainly by suppressing the secondary flow region present near the shroud at the impeller outlet. This leads to a lower strain rate, resulting in lower losses. The efficiency decrease due to the increased tip clearance was similar with and without pinch present. This indicates that in the diffuser, the main source of the tip clearance associated losses is the tip jet, and the tip clearance vortices mix out already in the impeller.