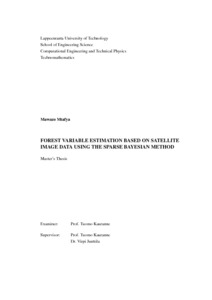 Forest inventory studies have been done to estimate and predict forest variable characteristics based either on field plot measurements or remote sensing data or both using different computational tools. The prediction results from those computational methods have proven to be efficient in different studies. One of the approaches that have been applied is the Sparse Bayesian method whereby the predictions have been done when both sattelite image and Laser scanning data as well as field plot measurement are considered. The method works such that regression models are formulated automatically by an algorithm that derives an optimal set of features by comparing different weighted combinations of forest stand variable values with one another. The formulated regression models estimate different forest stand variables like timber volume. The objective of the study is to estimate forest variable based on satellite image data using the sparse Bayesian method. The estimation of forest variable is done by considering different options such as direct estimation using bands values, defining those band values based on forest canopy density, biophysical indices as well as vegetation indicators like Normalized Difference Vegetation Index (NDVI). Also, the satellite image of several years around the target year are considered in the extraction of data.