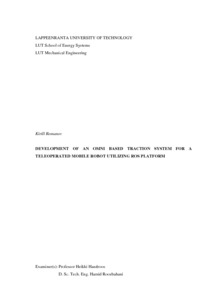 The traction system is one of the key systems of the mobile robot which determines its ability to move in confined spaces when it is needed. The TIERA robot was developed in the Laboratory of Intelligent Machines at Lappeenranta University of Technology to perform various maintenance tasks in hazardous environments. The thesis project is focused on developing the traction system software of the mobile robot and providing the possibility of its remote control from the operator station. To accomplish this task, the communications system developed on the basis of Wi-Fi technology, Robot Operating System (ROS) middleware and Secure Shell (SSH) technology have been used.

The mathematical model of the traction system for the robot platform with four Mecanum wheels is introduced. The influence of previous researchers' developments on the decisions taken in this thesis, as well as the peculiarities of working with ROS and hardware installed previously are explained. Features of the software code development and implementation taking into account the hardware used in the TIERA traction system as well as the requirement for its remote control from the operator station are discussed.