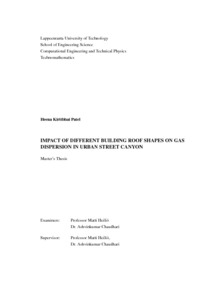 Urbanization on earth has increased exponential in past few years and is predicted to increase with high rate. The industrial revolution leads to the emission of various gases in the atmosphere that has harmful effects. The urban canopy is a collection of several isolated buildings which are aligned along a street in the horizontal direction. The distinct types of roofs are design in order to test them when helium is emitted from a stack, which is located before the canopy. Computational Fluid Dynamics (CFD) is used to study the flow behaviour as well as subsequent gas dispersion over urban canopies. CFD simulations are carried out using ANSYS Fluent package. The flow is solved by using RANS approach. Further, the gas dispersion is modelled using a species transport model. The fully developed Atmosphere Boundary Layer (ABL) profile is implemented as boundary condition by a User Defined Function (UDF). The numerical results show the significant difference in gas dispersion, velocity and turbulence for different roofs. The shape of roof played a key role in flow as well as gas dispersion over buildings and in the streets. It is observed that the roofs with sharper edges showed minimum mass fraction whereas some roof showed higher turbulence which leads to higher mixing of gas. The recirculation of gas in the gaps of the buildings helps in removal of pollutant in the streets.