Discrete modeling and analysis of contact networks in epidemic models 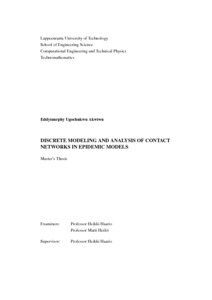 The use of compartmental models has been a dominant framework for modeling infectious diseases. These models assume that the underlying population is fully mixed. Studies have shown that in reality, the rate at which an infectious disease disease propagates in a population also depends on the pattern of contacts individuals make. Thus an alternative way of modeling which captures the heterogeneous nature of the population is the use of contact network models. Several contact network models have been proposed; however in this work we propose a simple and straightforward method of creating a contact network, where schedules in form of a calendar is created for each individual in the population. The contact pattern in the network model is limited or/and randomized in order to explore its effect on how the disease spreads. The results are compared to the mass-assumption model which shows an agreement with the randomized-mixing assumption of the traditional compartmental model, while the limitation in the contact pattern in the network model shows the effect of restricting movement in the spread of the disease.