The study of laser ablation's features of aluminosilicate ceramics 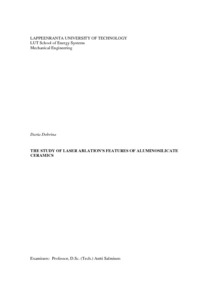 The Master Thesis studied the liquid-assisted laser ablation of ceramics. Six alumina ceramics materials with different composition (Al2O3 from 16% to 98%, SiO2 up to 72%) were exposed to pulsed and continuous wave irradiation in near IR and IR regions. The effect of bulging of melt bath during ablation and expansion to the glass sphere above crater after cessation of laser action were observed, recorded and analyzed. The samples mostly prone to this effect were defined. In addition, thickness, hardness, chemical and optical properties of spheres were measured. The overall mechanism and modeling were presented according to high-speed camera and thermal imaging monitoring data.