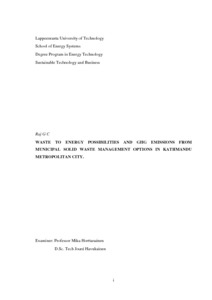 The management of municipal solid waste (MSW) in Kathmandu metropolitan city (KMC) is a key issue and is at the increasing rate causing a severe effect on the environment and human health. The current waste management system in KMC is fixated on waste collection and disposal. With the identification of the existing problem, this thesis work aims at discovering various waste to energy (WtE) options, calculating greenhouse gases (GHGs) emission and providing a recommendation for the better optimization.
In this thesis work, the waste management options are divided into five different scenarios including the present scenario. In scenario 1 or baseline scenario the total amount of MSW collected is disposed of to the landfill site. Scenario 2 includes mass incineration of the total collected MSW. In scenario 3 the collected MSW fractions are disposed of to the landfill site, where methane gas is collected through landfill gas recovery option. In Scenario 4, the mixed MSW after source separation of an organic waste fraction is taken for Refuse-derived fuel (RDF) preparation in Mechanical biological treatment (MBT) plant. The organic rejects from the process are landfilled, metal rejects are recycled, and RDF is incinerated. In Scenario 5 the separately collected organic waste fractions are anaerobically digested, metal and glass are recycled, and all other remaining waste fractions are landfilled.
The estimated net calorific value of MSW in KMC is about 4,07 MJ/kg which is technically not feasible for the mass incineration. To carry out the mass combustion process in scenario 2 the coal is added to the system to obtain the net calorific value of 7 MJ/kg. The highest electricity generation is from scenario 2 but the system is not fully renewable. The electricity generation from Scenario 3 is the best option as it is a fully renewable system which generates electricity of about 12 800 MWh annually. Moreover, the scenario 4 is also a good option with electricity generation capacity of 43 200 MWh where there is an addition of small amount of coal (i.e. 1 245 t/a) to the system. Compared to the present Scenario 1, the GHG emission reduction of about 64% or by about 82 000 t/a is viable in Scenario 3. The MSW fractions of KMC is highly organic, which is best suitable for electricity generation through landfill gas recovery option and AD process.