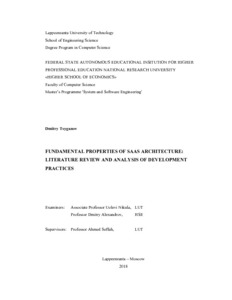 Software as a Service is a software delivery and licensing model according to which the software is stored and maintained by a service provider in the cloud and accessed by service consumer through a web interface. SaaS has gained popularity among software providers in recent years, with old companies offering their products as a SaaS application and new companies specializing in SaaS from the beginning. SaaS model has been implemented in various businesses and state services. One of the examples of successful SaaS implementation are e-Government services in Estonia. However, the SaaS model introduces new challenges compared to a traditional on-premise model. There are various SaaS-related architectures, frameworks, and practices proposed in the literature. Such studies usually describe architectural properties which are considered to be related to SaaS. This study contains two parts: the first part is a literature review in which important SaaS architectural properties are identified based on a number of scientific papers in which those properties were mentioned. The second part is a case study in which Estonian e-Government services are analyzed against the properties which were identified in the literature review. The conclusions are made about the list of important properties and their significance.