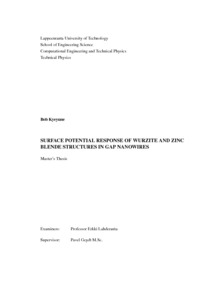 We report the surface potential response of the Wurzite and Zinc Blende crystal phases in GaP nanowires grown by Vapour-liquid-solid mechanism. Two wires from sample 261 showed an average potential difference $\Delta CPD_{WZ-ZB}$ along the NWs to be 60mV$\pm$ 10mV. The exprimentation was conducted with the use of Kelvin Probe Force Microscopy. The technique allows to observe the distinctions of the switching between the surface potential values along the nanowires.
Photoluminescence signal were obtained to confirm the existence of different phases in the sample. The Wurzite and Zinc Blende phases were observed from the variations of the photoluminescence peaks. The work expands on the understanding of crystal structure-dependent electrical transport properties of GaP nanowires.