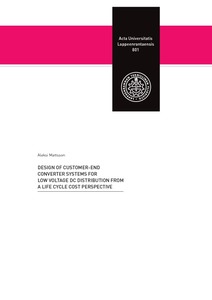 Over the recent years, a lot of effort has been put into improving the efficiency and power density of power electronic converters, and efficiencies exceeding 99% and power densities of 10 W/cm3 have been reported. While it could be argued that the system cost is also minimized when these two parameters are maximized, the result is often a compromise between the different parameters. High values for either efficiency or power density are often achieved by applying some state of the art technology such as wide bandgap semiconductors, which can potentially increase the cost if the technology is not yet mature for high-volume production. If the system is evaluated based on figures of merit such as power density or weight, the analysis is typically done only for the nominal power of the system as this mainly dictates the design in these two cases. However, in an application such as the low voltage DC system, the load can vary on a large scale, whereas only a small amount of time is spent at or near the nominal point. In such a case a system optimized for power density or weight can potentially lead to a suboptimal result because typically some of the performance at partial load is sacrificed in favor of a higher performance near the nominal point.

In this doctoral dissertation, a life-cycle-cost-driven design methodology of power electronic converters is investigated. The converter is designed to be a part of a low voltage DC system supplying a residential customer. The behavior of an average residential customer as a load is used as one of the inputs for the design process, and therefore, a detailed analysis of the load is carried out. In the analysis, the life cycle cost is defined as the sum of the main components of the power stage of the converter and the losses during the utilization period of the system. Power stage components such as output filtering, semiconductor switches, heat sink, gate drivers, and DC link capacitance are included in the analysis whereas their parameters are freed in the design process. The selection of the switching frequency, the nominal power, and the option of dividing the nominal power among several parallel converter modules are also analyzed.

It is shown that using the load behavior of actual customers is clearly beneficial when the target is to find a cost optimal design of a converter used to supply a residential customer. Although significant drawbacks can be present if the converter has to supply a high current, required by either the protection devices on the customer’s premises or the dynamic properties of the load, they can be, to some degree, mitigated by using parallel converter modules instead of one high-powered module.