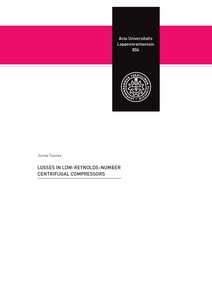 The deteriorated performance of a centrifugal compressor due to low Reynolds numbers is usually accounted for in the design process with empirical correction equations published in the literature, but the correction equations do not offer any consideration of whether the efficiency drop can be countered somehow. In this work, the loss generation in low-Reynolds-number centrifugal compressors is investigated theoretically and numerically, and the results are compared to empirical correction equations. A new method, called the hybrid method, is developed to study the boundary layers in the blade passages in closer detail.

The results of this work indicate that the greatest increase in the Reynolds-number losses occurs in the boundary layers near the impeller hub and diffuser surfaces. In addition to the increased boundary layer losses, the results indicate that the tip leakage flow is strengthened with the decreasing Reynolds number, even if the relative tip clearance is kept constant. In order to improve the performance of low-Reynolds-number centrifugal compressors, the boundary layer thickness should be reduced and the tip leakage flow controlled. Passive flow control methods would be better than active ones in the micro-scale compressors due to the less complex structure, but their performance depends on the operating conditions.