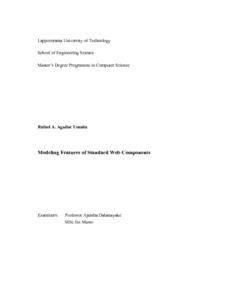 World Wide Web Consortium (W3C) is developing a set of standards for front-end web development since 2014, known as Web Components. The additional functionality addresses many of the problems of an increasingly complex font-end, creating necessity of new modeling tools in this field. Existing efforts in terms of modeling web such as WebML, and more recently Interaction Flow Modeling Language (IFML) are capable of reflecting significant aspects of web development. However, Web Components introduce features that none of the existing initiatives contemplate by default. This work aims to contribute by proposing an extension of IFML that is capable of describing structural aspects of web components standards that include: Shadow DOM, HTML Custom Elements and HTML Templates.