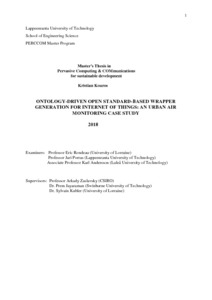 The Internet of Things paradigm is a new technological trend, considered as the next evolution of the Internet. Its impact is expected to affect our business, societies and wider culture. The technology however is still in its early days and several stumbling blocks need to be overcome. In the scope of interoperability and integration of new IoT data stream (stemming from IoT devices) in an existing IoT ecosystem, this thesis proposes a new methodology to automate the integration process of smart objects. Our proposed methodology uses domain ontologies and sensor description ontology to support the automation process. The proposed methodology is furtherly applied in the development of a proof of concept system, called Standard-based WrApper Generation for Internet of Things (SWAG-IoT). The SWAG-IoT system enables a new IoT data stream to be properly annotated through the use of W3C-based semantic technologies and integrate its data using open standards such as O-MI/O-DF into a wider IoT ecosystem. We demonstrate the efficacy of this system in the context of green ICT application namely air pollution monitoring. The report presents the used methodology, the system architecture and implementation. A proof-of-concept implementation of SWAG-IoT system and evaluation of the system performance is included. A discussion on the future possibilities concludes the thesis.