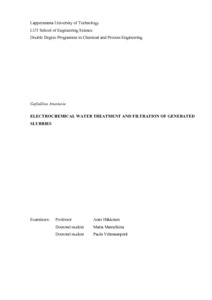 This work is focused on the electrocoagulation (EC) as an electrochemical water treatment process followed by solid-liquid separation of the solid species, which form during the treatment. In the theory part of the thesis, the mechanisms of electrolyte coagulation are described. The mechanisms of pollutants removal in the EC and the factors affecting the EC efficiency are listed. That is followed by the theory of the cake filtration and the description of parameters that have an influence on the process performance. The description of the equipment used for performing the filtration tests are given.
In the experimental part of the paper, batch EC-experiments were performed at the laboratory scale with iron and aluminum electrodes used in different combinations. The removal efficiencies of nitrate, sulphate, chloride, ammonium and total nitrogen under the established conditions were determined. The measurements of pH, reduction-oxidation potential and conductivity were performed to investigate the processes occurred during the treatment and their effects on the formed solids. For determination of the solid species X-ray diffraction analyses were made. The flocculated nature of the particles was confirmed by the scanning electron microscope analyzes where the aggregates were observed. Based on the SEM images, shapes of the aggregates were estimated as very irregular. The size distribution data for the aggregates were obtained based on the laser diffraction method.
Suspensions generated during the EC procedure consisted of mineral solid matters but their filtration behavior differed from the typical behavior of mineral-based slurries due to the properties of the particles contained in the slurry. To understand this phenomenon, the filtration experiments were conducted. The effects of operating pressure and slurry volume on the process performance were estimated based on the constant pressure filtration tests. The shape of the particle aggregates was considered as a main parameter that determines the cake structure with such a high specific resistance and moisture content. To facilitate the filtration the addition of filter aids was also studied. In addition to this, preliminary tests were made to estimate the applicability of vacuum filtration for the separation of solids.
EC was found to be an effective method for removal of nitrate and sulphate from the water solutions. The highest removal efficiency was achieved by using Al/Fe electrode combinations. Vacuum filtration has shown a poor efficiency in terms of the purity of filtrate whereas pressure filtration was considered as an appropriate method for SLS of the studied electrochemically generated slurries. Application of filter aids was estimated to be reasonable and recommended in order to facilitate and shortened the pressure filtration procedure.