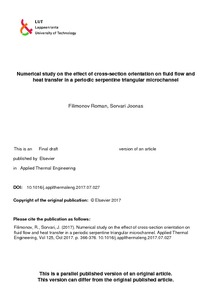 The influence of cross-section orientation on fluid flow and heat transfer in a periodic serpentine equilateral triangular microchannel was investigated by means of computational fluid dynamics (CFD) modeling. Serpentine channels with cross-sections of upward- and left-pointing equilateral triangles were considered. Serpentine channels with twisted sections of different degrees of twisting were also considered and evaluated. The simulations were performed for fully-developed periodic flow with constant properties under constant wall heat flux (H2) thermal boundary conditions at Reynolds numbers of 50, 100 and 150 (corresponding to Dean numbers of 38, 76 and 114). The results showed that the heat transfer performance of the triangular channel is sensitive to the orientation of its cross-section. At all the Reynolds numbers studied, the channel with left-pointing triangular cross-section provided a higher mean heat transfer enhancement than the channel with upward-pointing cross-section, whereas the pressure drop remained the same. It was also found that by employing twisted shapes, it is possible to rotate the cross-section into a more favorable orientation for local heat transfer and thus improve the overall thermal performance further. With a moderate pressure drop increase, mean heat transfer enhancements for the channels with twisted sections were found to be greater than those for non-twisted configurations over almost the whole range of Reynolds numbers considered. However, the mean heat transfer enhancement did not rise with increasing degree of twisting, although the pressure drop increased with the degree of twisting.