Owners of second homes, locals and their attitudes towards future rural wind farm 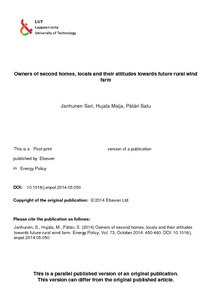 Wind power has been identified as one of the most promising sources of renewable energy. However, its diffusion has not been as rapid as anticipated. The objective here is to analyse attitudes towards wind power among Finnish local residents and owners of second homes. First, we assess their existing knowledge of and level of interest in energy issues and wind power. Second, we analyse potential differences in attitudes between the two stakeholder groups when it comes to wind power in general and the proposed wind farm in particular. The study draws on both quantitative survey data and qualitative interview data. One of the key findings concerns the different perceptions among locals and owners of second homes in a rural area. Both groups were interested in questions of energy production and accepted wind power in general. Nevertheless, the proposed project in Ruokolahti seemed to polarize attitudes. This paper offers new insights into attitudes to wind energy among Finnish locals and owners of second homes in the same area.