Benefits from Open Data: Barriers to Supply and Demand of Open Data in Private Organizations 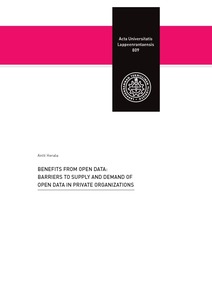 School of Business and Management, Tietotekniikka

Open data is a concept that has been somewhat readily adopted by governments. The key ideology behind open data is to release previously restricted data with a licence that allows all forms of use, reuse, and redistribution. Governments are opening their data in order to become more transparent towards their citizens but also in order to foster individual and organizational innovations. However, the innovations become one-sided and are difficult to make based on only government data, which has led an interest towards open business data, found from privately owned organizations, who are rarely opening their data. While open data can be used to bring value to the data publisher as well as the users, the companies are not interested in these prospects.

The goal of this thesis is to illuminate issues behind the company reluctance to open their data as well as identify issues in the use of available open data. The value of opening data for companies was identified from the literature, while the interest towards open data was surveyed from companies. Afterwards, interviews were organized with software developers to further recognize the issues of supplying and demanding open data. To further highlight the issues of publishing open data, it was compared to hackathons, which are used for external innovation and crowdsourcing by companies.

Supplying open data was not seen as a viable solution for companies, exactly because the process of giving away something that could be used for value does not suit the current business environment. It is important for a company to receive benefits and/or profits from their data, and be able to have control over the data use but also the innovation process; the aspect of open data fostering innovation does not seem to apply in business. Issues were also found in the usability of open data: it is a difficult resource to use because it requires resources to find and may not even suit the necessary context. New forms of communication and intermediary business models are required, which would minimize the risks and costs of opening data to benefit the publisher as well as increase the two-way dialogue between interested parties. At the same time, new models would allow better discoverability and a usable structure for already opened data, which would make it easier to use in multiple contexts, stimulating the use of open data.