An experimental and theoretical investigation of power losses in planetary gearboxes 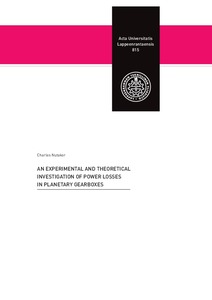 Gearboxes based on planetary gear sets are preferred for their advantages, such
as higher gear ratios, improved self-centering capabilities, kinematic flexibility,
favorable bearing support conditions and higher power densities with less noise
in a more compact size. The multiple-planet branches of planetary gear sets are
usually symmetric about their axes so they are a more suitable choice in the
design of a drivetrain configuration where there is high demand for low-speed
high torque, high-speed low torque or both operating conditions. Meeting the
design requirements for such drivetrain configurations can result in a compromise
between the reliability and efficiency of the gearbox. The main goal of this study
is to experimentally and theoretically investigate the power losses of planetary
gearboxes.

A planet–sun gear mesh power loss model is first developed to quantify the
influence of micro and macro geometry on a single planet–sun gear mesh power
loss. Also, several base oil types were investigated to understand their influence
on planet gear bearing power loss. Understanding and quantifying the influence
of base oil types and viscosity on planet gear bearing power loss is essential as it
dictates the effective film thickness at the rolling element-raceway contacts. To
account for power losses in a wind turbine gearbox, the planet–sun gear mesh
power loss model was further developed to include a non-uniform load distribution
model to allow the prediction of the varying gear tooth loads at the planet–sun
and planet–ring gear mesh.

Considering that the next generation gearboxes for wind turbines and heavyduty
off-road working machines have a planetary gear set incorporated with a
permanent magnet synchronous machine, the two groups of power losses initially
defined for conventional planetary gearboxes had to be extended to accommodate
the power losses arising because of the conventional mechanical gear interaction
with permanent magnet electric motors. For this, a methodology for predicting
power losses in an integrated planetary gearbox was developed and validated
with measurement data from a prototype integrated gearbox. A good correlation
between prediction and measurement was successfully achieved and load-dependent
power losses were identified as the most dominating power loss components, with
a major contribution emerging from the electrical components.