Dissolution of sodium, aluminum and caustic compounds from bauxite residues 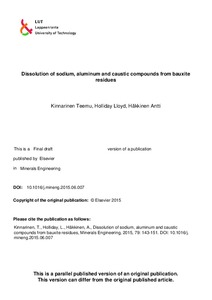 Bauxite residues consist of solid particles and a strongly alkaline liquid. Depending on the selected disposal method, the solids content of washed bauxite residues varies from 30 to 70 w-%. The objective of this study is to provide better understanding of the leaching of metals and caustic compounds from bauxite residues. These issues are receiving more attention in the alumina industry, not only due to the need to recover the valuable compounds more effectively, but also due to the environmental impacts caused by leaching of soluble metals and alkali from bauxite residue disposal areas. Three different bauxite residues of industrial origin were investigated by straightforward leaching and dilution methods by using water as the diluent. In the analysis stage, dilution with a nitric acid solution was also tested. The main dissolved compounds were analyzed with atomic absorption spectroscopy and thermometric titration. The results showed that the sodium balance was influenced by the applied L/S ratio, which implies that the solid particles were partially dissolved. Comparison of the dissolution behavior of sodium, aluminum and total caustic (i.e. the hydroxyl ion content) revealed changes in the Al/Na and caustic/Na ratios, which deserve to be studied further in the future. Grinding the particles did not increase the liberation of sodium from the solids, i.e. the role of captured sodium did not seem to be important.