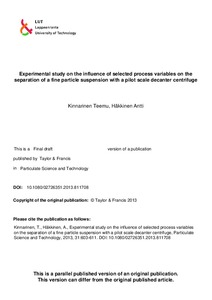 Decanter centrifuges are used widely in the chemical and process industries for dewatering and classification of solid-liquid suspensions. The most important applications of this class of centrifuges are found in wastewater sludge treatment and in pigment production. The objective of this study was to investigate the operation of a pilot scale decanter centrifuge in a challenging dewatering application. Dewatering tests were performed using fine-particle slurries consisting of water and various concentrations of kaolin. In addition to the solid concentration of the feed, the feed rate of the suspension and the differential speed between the bowl and the conveyer screw were also chosen as variables. The experimental conditions were selected according to a factorial test design and the responses monitored included the production capacity (productivity) of the decanter, the solid contents of the cake and the centrate, as well as the time that was required for the stabilization of the test unit. The results obtained clearly showed that the studied variables have a significant influence on the performance of the dewatering process. The variables were also able to explain the dewatering results at a high level of statistical significance. The repeatability of the experiments was, in most cases, good: On average, the relative standard deviations for the productivity and the solid contents of the cake were 6.0% and 0.5%. It was also apparent that random variations in the feed conditions may have a remarkable and long-lasting impact on the operation of the centrifuge.