Effect of mixing on enzymatic hydrolysis of cardboard waste: Saccharification yield and subsequent separation of the solid residue using a pressure filter 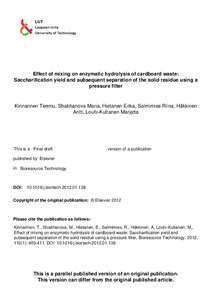 Cellulosic wastes, from sources such as low-quality cardboard and paper, are regarded as potential feedstocks for bioethanol production. One pathway from these cellulosic materials to ethanol is saccharification (hydrolysis) followed by fermentation. Saccharification is commonly performed using enzymes that are able to cleave the cellulosic structure to smaller units, preferably to glucose monomers. During the hydrolysis, mixing conditions have a considerable impact on the performance of the enzymes. Thus mixing conditions in the hydrolysis tank can also influence the downstream operations and, consequently, the overall economy of the bioethanol process. In this experimental study, four types of impeller, at different hydrolysis conditions were used. The effect of mixing on the glucose yield and on the filtration characteristics of the hydrolysate was evaluated. It was shown that not only the sugar yield depended on the mixing conditions: the effect on the solid–liquid separation step was even more significant.