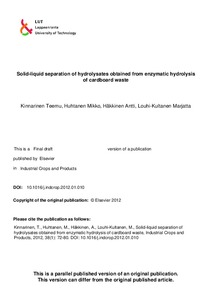 Enzymatic hydrolysis provides an environmentally friendly pathway from cellulosic biomass to sugars that can be fermented to produce ethanol. The hydrolysis step has a marked influence on the overall efficiency of the bioethanol process. Since the cellulosic substrate cannot be completely cleaved to sugars, there always remains a solid residue suspended in the hydrolysate. Solid–liquid separation performed at this stage can improve subsequent membrane filtration (for recycling the enzymes, or concentrating the sugars prior to fermentation, for example). The fermentation process can also be controlled more readily if the cellulosic residue is removed after the hydrolysis. For the present study, shredded cardboard was chosen as the cellulosic raw material. Non-degraded solids were separated from enzymatically produced hydrolysates using a laboratory-scale pressure filter. The influence of process-related variables, such as enzyme dosage, the level of pre-milling, and the initial substrate concentration were investigated by determining the concentrations of glucose and xylose during the hydrolysis. Filtration tests were carried out at three different pressures immediately after each batch of hydrolysis was completed. The results show that some of the chosen variables have an unexpected effect on the filtration characteristics. The degree of conversion of the cellulosic substrate to glucose and xylose was also affected by the investigated process variables.