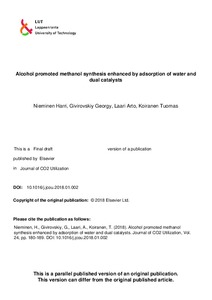 Alcohol-promoted methanol synthesis uses heterogeneous methanol synthesis catalysts in alcoholic solvents where the alcohols act as a co-catalyst. In the presence of alcohol, the reaction proceeds through alcohol formate ester as an intermediate, allowing methanol synthesis at lower temperatures than conventional gas-phase synthesis. In the present work, alcohol-promoted CO2 hydrogenation to methanol was studied experimentally using a Cu/ZnO catalyst with 1-butanol and 2-butanol as solvents. As water is known to inhibit methanol synthesis on Cu/ZnO catalysts, the alcohol-promoted process was further developed by in-situ adsorption of water using a 3 Å molecular sieve. The methanol productivity significantly improved as a result of the lowered concentration of water. The concentration of water was thus identified as a key factor affecting the overall methanol productivity. As the alcohol-promoted methanol synthesis process is characterized by two separate reaction steps, the use of separate catalysts optimized for each step offers an interesting approach for the development of this process. Such a dual-catalysis concept was tested using a copper chromite catalyst together with Cu/ZnO. Promising results were obtained, as methanol productivity increased with the addition of copper chromite. Catalyst characterization was carried out using XRD and SEM-EDS and potential effects of observed changes in catalyst structure during reaction are discussed.