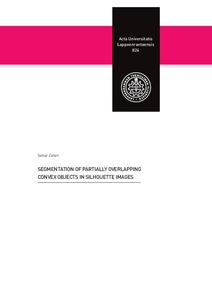 Overlapping objects segmentation is of great importance for the automatic analysis in many industrial and biomedical applications. For example, in industrial applications characteristics of nanoparticles by shape and size is the key step in the synthesis process and in biomedical applications, the size and shape variation of cells are needed for pre-cancer identification. The manual assessment is a laborious task and sensitive to human interpretations. Thus, automated methods are required to detect each individual object to perform the analysis. Nevertheless, the automatic detection remains a challenging problem due to the presence of a massive number of objects with varying shape, size, and appearance. This problem becomes even more complicated when the objects are overlapped.

This thesis presents a novel framework for automatic segmentation of overlapping convex objects. The framework follows a three-stage sequential procedure of image binarization, contour evidence extraction, and contour estimation to improve the accuracy of the segmentation. In the binarization stage, the regions of interest are separated from the background of images. In the contour evidence extraction stage, the visible contour of each individual object is identified. In the contour estimation stage, the full contours of each object is approximated. Novel approaches for each module of the framework were developed, and three segmentation methods were implemented. The binarization was carried out through the Otsu method and a CNN-based deep learning framework, U-net. The contour evidence extraction was performed by an edge-to-seed point association and segment grouping based on concavity analysis of objects’ contours. The contour estimation was done by ellipse fitting and a Gaussian process regression model to resolve the full contours of the objects.

Three segmentation methods were developed based on the proposed framework: seed point-based contour evidence extraction (SCC), concave point-based contour evidence extraction (CC), and concave point-based contour evidence extraction by branch and bound (CBB). In the first method, the contour evidences were obtained through the object edge point and its relation to the object’s seed points. The other two methods detected the contour evidence via the concavity analysis of the objects’ contours along a segment grouping algorithm. The concave points split the object contour into multiple segments. Segment grouping merges the contour segments that belong to the same object. In the second method, the segment grouping was performed using the properties of the ellipse fitted to each segment. In the third method, the segment grouping was done through the branch and bound optimization algorithm. The proposed segmentation methods were validated on the three synthetic and two real-world datasets consisting of images of nanoparticles of various sizes and degrees of overlap and the experiments showed that the proposed segmentation methods outperformed the competing methods.

The proposed framework relies only on objects’ contour information and could be applied to other segmentation problems where the objects are partially overlapping and have an approximately convex shape.