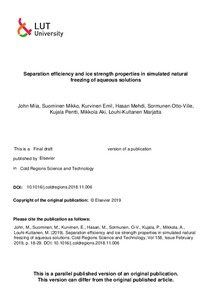 In geographical regions with sub-zero temperatures, natural freezing can potentially be used as an energy-efficient purification technique for industrial wastewaters. The utilization of this technique requires knowledge of the effect of impurities on the strength of the ice to enable the effective harvesting of produced ice. Previous studies of the mechanical properties of model-scale ice have tended to focus on the initial solution, and little consideration has been given to the amount of impurities trapped inside the ice. The aim of this research is to evaluate the separation efficiency during the natural freezing process by quantifying the impurities trapped inside the ice formed from known concentrations of aqueous solutions and to investigate the effect of impurities on the bulk mechanical properties of the ice.

In this study, twenty similar size ice beams were prepared in freezing boxes in a temperature-controlled cold room from five different aqueous solutions – tap water, and ethanol and sodium chloride aqueous solutions of two different molalities, i.e. 0.1 mol/kg and 0.3 mol/kg. The bending strength and natural frequencies of the ice samples were measured in the freezing conditions, and the concentrations of impurities in melted ice samples were determined. The research shows that with the ethanol and sodium chloride solutions, the concentration of impurities inside the ice clearly decreased in comparison to the initial solution. The structure of the ice from the different solutions differed significantly; as the tap water formed columnar ice, ethanol ice grew through large platelets, while the structure of the sodium chloride ice was a mixture of the two forms. The tap water yielded the highest strength ice and the ice formed from the ethanol aqueous solutions the weakest ice. The measurements indicated that the concentration of impurity in the ice reduces the mechanical strength and the magnitude of the effect varies with the chemical characteristic of impurity.